Ain’t She a Butte?

“By the time you’re atop the windswept, grassy summit of Crown Butte near Simms, about 25 miles southwest of Great Falls, you’ll have hiked over any number of obstacles including muddy roads, cow pie mine fields, crumbling cliffs, and maybe a rattlesnake or two. But the view is worth it. On a bluebird day, you can see a hundred air miles north, nearly to the Canada border. To the west, the jagged, snowcapped spine of the Rocky Mountain Front races away toward Alberta. Closer, there’s Haystack Butte, a steep volcanic cone rising like a pyramid before the Front; the flat, eroded bench of Shaw Butte to the northeast; and the sharp profile of Birdtail Butte, not a peak at all but a jagged fin of eroded stone that requires ropes to climb….

Which raises the question: So what exactly is a butte?”

My piece about the oddities and inconsistencies of the landforms we call buttes appears in the July/August 2019 issue of Montana Outdoors.
Read the full story here. 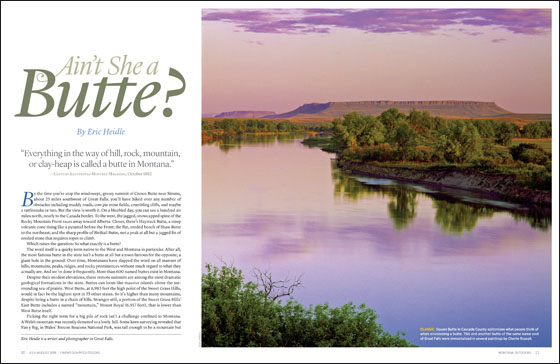 Pictures Worth a Million Acres
Covers